October 29, 2012:  BOOT CAMP SUCCESS!
We are proud to say that the 2012' Triple Crown expedition was a great success! Upon completion we take with three successful Everest participants for Everest 2013' that are strong, competent and experience wise and other participants who don't have their sights on Everest have tools, experiences and new friends to take their climbing ambitions further. Congratulations to everyone on the teams, it was a blast!   Over and out..... Tim    .... see you on Everest!

There are some photos uploaded to face book... enjoy!

Posted by Tim Rippel at 1:01 PM No comments:

Kiran confirms that the IP group is now in Kathmandu, they made it out a day early and we expect they are enjoying hot showers and a night out on the town to it's fullest and checking in with loved ones at home.
The remaining Triple Crown team has added a little extra to the itinerary. We summited Pokalde  (5806m) today and afterwards the team continued on over to Gorak Shep. Tomorrow they will take a trip up to Everest Base Camp and climb Kala Pattar for those ultimate photos while I stay here at base camp getting things organized for Lobuche East, our final summit of three.
Over and out .. Tim
A little trip down memory lane:  I came across our photos from the 1st. Canadian Ama Dablam Expedition in 1996. I forgot what it used to be like, we were the only ones in the valley and on the mountain. So grateful we had that time, it's all so much different now, thought I'd share during this cyber down- time in the Khumbu.
First Canadian Ama Dablam Expedition 1996 - Tim Rippel photos
Posted by Tim Rippel at 12:54 PM No comments:

Tim checks in from Pokalde base camp. He tells me that he is so blown away by the view here and that it's hard to focus on 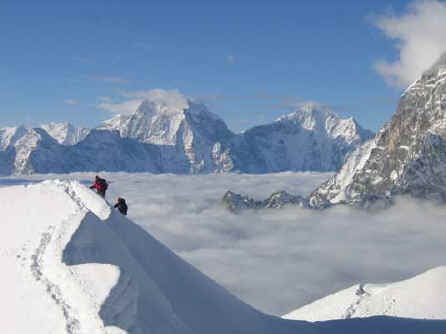 climbing and he needs to pinch himself from time to time to make sure it's not all one big beautiful dream. He can see both the Khumbu Valley and Makalu valley, he can see Makalu,  Ama Dablam, and the entire Himalayan kingdom it seems like from here. They're surrounded by beautiful lakes and their camp location is comfortable, flat and meadow like. He's very pleased with what they've found for climbing here. Great ice, the glacier, a big vertical rock wall and the route to the summit of Pokalde is all a rock this time of year.

The team is now down to just "Triple Crown" climbers, trekkers are now in Kathmandu and Island Peak climbers are making their way to Lukla for a flight on Tuesday or maybe even Monday to Kathmandu.

Today the TC climbers climbed ice, did glacier rope rescue work and got out on the rock. The team is small now so Tim got all our staff including kitchen and porters out on the rope doing some climbing.  The camp crew never get to do this so it was a very rewarding day for all, they had a blast!

Tomorrow morning they will climb to the summit of Pokalde (5806m), the last 50m or so they will be fixing the route with rope,  it's four hours up and four down. The next day the team will push on to Lobuche East base camp for the third objective of this expedition.

Tim is giddy, he's loving this - no one except for them here, breathtaking views and a great climbing mix. We are happy that this inaugural expedition is working out so well managing to side step the crowded trails and routes and exploring new playgrounds.

We finally have a summit list, lots going during the summit push, so much so that I needed to get the details clear before posting. That just happened so I will share.

At 06:30hrs at about 5900m Island Peak climber Deborah Ariss caught her crampon in a way that caused her to twist her ankle to the point of breaking it and a rescue was needed. Tim organized a rope rescue. Helping him on the ropes was Sean Kirkwood from Australia, Dr. Murad Lala from India and Jack Rubens from the US who assisted in lowering her to a platform area where a helicopter could pick her up.

The winds were not working in their favor, hitting around 20km at 6000m causing the helicopter to be kicked around in the wind for too long, so long it was running out of fuel. Finally it sat down at Island Peak base camp for about 4 hours waiting to see if the winds would die down and call for more fuel to be flown up.  During that time the helicopter encountered a battery charge issue. While waiting for all this to take place Tim had given his down jacket to Deborah and was starting to get hypothermic, fortunately he had oxygen to give her at which most don't take here and was able to keep her stable and circulation going to keep her warm. Jack Rubens, Paul Pargeter and Rob Morill assisted Tim with Deborah after their summit and the others descended after offering up more clothing to Tim and Deborah. The Sherpas jumped in to hug and slap Tim around to warm him up and he says that worked out, he was able to warm up again. Around 11:30NPT Fish Tail Air helicopter got it's fuel and charge sorted out and Deborah was successfully air lifted to Kathmandu.

When training on this training climb we prefer climbers sit around at night in the comforts of their chairs by the heater in the tent and talk about things that go wrong and how to deal with it and save lives and setup scenarios to teach rope rescue, but nothing really compares to learning from the real deal. I think these guys got their monies worth on that part of the program at the unfortunate expense of Deborah's painful situation.

Summit List:  Dean Somes, Michael Boni, Michael Pinheiro, Paul Pargeter, Scott Driscoll, Rob Morill, Brian Corbet, Ngima Sherpa and Sonam Sherpa and maybe a few more.. Tim was pretty tired and not too coherent when we spoke and the added interference of the Chinese satellite cutting conversations as it passes over the area.

What's next?  IP members heading out tomorrow and the "Triple Crown" team will be heading over to their next objective -  Pokhalde - a 5806m mainly rock climb and then a summit bid on Lobuche East  (6119m).
3G and Internet seem to be bugged (or busted) this year up in the Khumbu so we don't know when we'll see photos, hopefully things are still working well down at Namche Bazaar when the IP team heads through there and they can dispatch some out for us.

for more: http://peakfreaks.com/everest_mountaineering_course.htm
Posted by Tim Rippel at 11:25 AM No comments:

Peak Freaks Island Peak - "Stomp to the Top" Summit push is on! 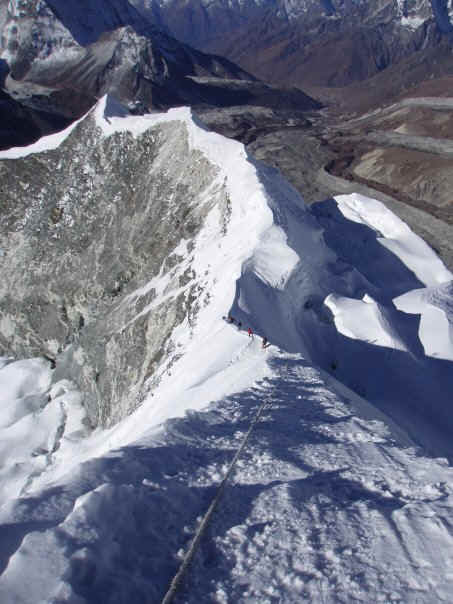 are in the grove for a summit push right this moment. Tim just called in as they were all pulling out of base camp. His next call will be from the summit at 6119m. Everyone is strong and feeling energized and stoked to be on the move towards the sky, no stopover at a high camp is in the plan now, it's going to be straight up and down in one push.

October 16, 2012'  Everyone is back!
All climbers are back at base camp and the trekkers are now on their way down the valley and will hopefully get some photos out soon. There's been a glitch up past Namche Bazaar for Internet services this year. We are on the move this expedition, not stationary like we are on Everest so we opted to keep to the tech toys to a minimum and rely on the local services but that didn't work out so well and we are in a location where the 3G signal can not be reached. After Island Peak we will be passing through the 3G zone and hopefully we'll be able to Stay tuned...  over and out... get something out. 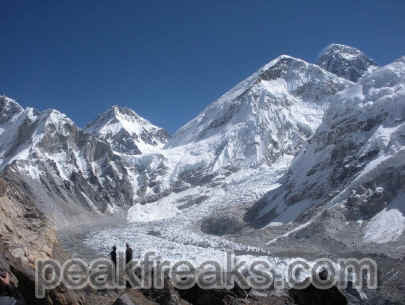 The Island Peak team arrived back at camp yesterday after a successful summit climb to the top of Kala Pattar (5545m). Today we all had a good rest around camp telling stories and discussing tomorrows push up to high camp. We've carried the ropes up and equipment so we're ready to stage ourselves for the first of three summits this expedition will be undertaking starting tomorrow.

File photo: View from Kala Pattar of Everest and the Khumbu Glacier.

More on our Everest Boot Camp:
Posted by Tim Rippel at 10:44 AM No comments:

Peak Freaks Island Peak- A day working on the glacier! 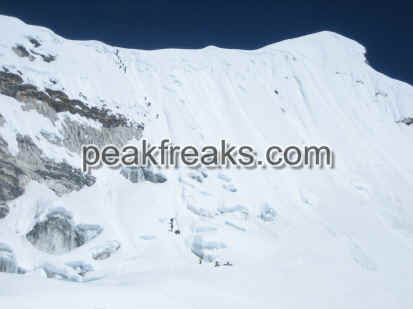 Yes we are tired tonight, dinner and a good nights sleep is in order. Our Island Peak team should be back at base camp tomorrow. We look forward to catching up on their news and enjoy a day of rest together and do some more work here on the routes then set out for our high camp on the 17th then our joint "Stomp to the Top" on the early morning of the 18th.

The weather has been holding nicely but the autumn chill is definitely setting in. Sure is nice having the heater to huddle around in the evenings.

Our evenings are spent playing cards and review of skills sessions and having long talks about Everest, the lure and what it's all about up there, what to expect and how to prepare oneself for success and survival on a major high altitude expedition.

We eat good up here, Ang Karsung is keeping the calories coming and lots of hot drinks and some fresh baking on those comfort food days. We have the same setup as what we use on Everest minus some of the solar equipment for electronics as we are a mobile expedition this time around climbing three different peaks. Rather than hanging at one base and slogging up and down the same route, we are instead making the most of a Himalayan experience getting around and seeing and climbing multiple peaks
.
Well that's it for tonight.... over and out... Tim